First things first. Wondering if Chef Ramzy ever crossed paths with Chef Ramsay? And if he did, how would that conversation go? Well, chef Ramzy Eid did come face to face with Gordon Ramsay in a London kitchen he worked for back in the day, and introduced himself as “a huge fan”, adding, “My name is also Ramzy.” And in classic Gordon Ramsay-style, was told, “There’s only one Ramsay in the kitchen.” While there may have been only one Ramsay in the kitchen that evening, Chef Ramzy, now in Dubai, is not in one but several kitchens.

Quite literally cooking up a whole fine dining meal by himself, with six or more courses, Ramzy is a Le Cordon Bleu-accredited chef, who moved to Dubai in 2021. In a city like Dubai, it’s hardly a surprise when one hears about a luxury service or stories of splendor. Whether it’s food, shopping, travel or infotainment, the city is always working towards making consumers’ life easier, more refined. So, becoming a successful private chef in this part of the world fit like a glove for the 29-year-old chef. But how did his journey take root? 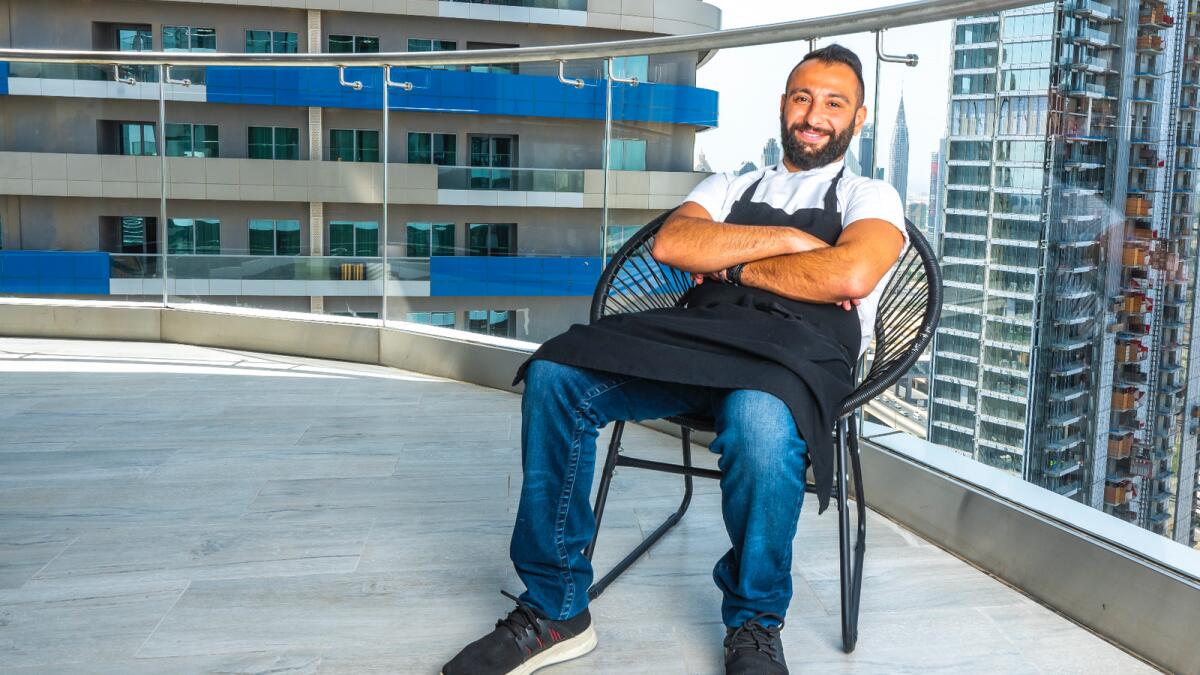 At age 18, Ramzy enrolled himself in the world-renowned culinary school Le Cordon Bleu in London, where his culinary training took place. But learning itself doesn’t prepare you enough for the restaurant world, the chef admits. “From there, I moved on to hotels and restaurants, one of which was the Savoy Grill by Gordon Ramsay. I was there for around two years. I moved from restaurant to restaurant, until I got to sous-chef level. The on-ground experience is what really teaches you,” the Lebanese chef adds.

What the culinary school cannot prepare you for, though, is the high-pressure situations one faces in a restaurant setting. Also something we often witness — in a more pronounced manner — in culinary shows, where cooking under time constraints results in feuds amongst teammates, is a “lived reality for many”, the chef mentions. “A lot of what we see on TV is real. There’s a reputation to maintain for the restaurant. The chefs can get hot-headed and throw things around. I’ve seen a yellow wet floor sign being flung across. I also once saw the chef throw a steak back on the person who cooked it,” says Ramzy.

Does the aggression stem from a place of passion? The chef believes it comes from being frustrated. “The chefs put all their time in training the staff. If you’re under pressure or know what you’ve cooked is not good enough, you shouldn’t send it to the table. We go by this saying, ‘Make it nice or make it twice’ because it could ruin the restaurant’s reputation. And the higher the standard of the restaurants, for instance, Michelin star restaurants, the higher the stakes,” he adds. 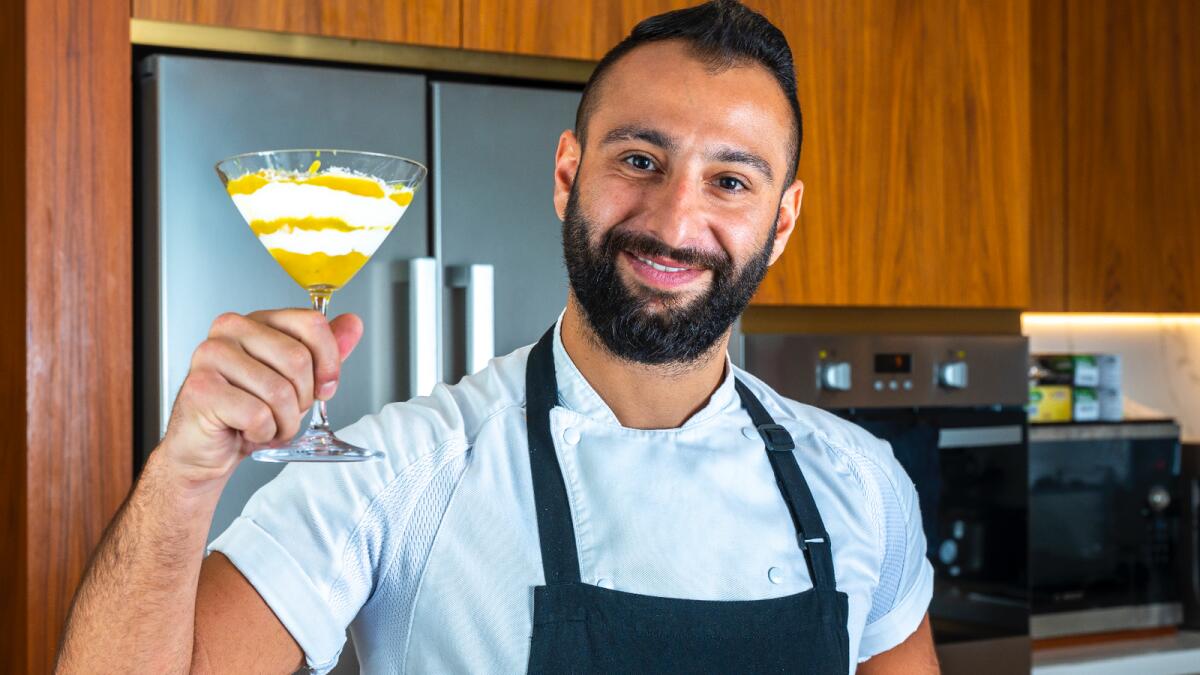 Recounting his personal experience, he mentions he once had a hot pan thrown at him. “Sometimes, so many orders come in at the same time, people get flustered or miss an order. I was trying to help the executive chef with plating but he didn’t want to be bothered. I kept telling him the pan is hot but he grabbed it by accident and burned his hand. Then he put it back on my arm,” says Ramzy. While experiences like these can send many of us running in the other direction, giving up was never an option for the chef. “It’s just the initial six months. You’ve got to power through. I saw around 18 people come and go, but they couldn’t get through the initial phase. After a while, I got a lot of acceptance and respect from the same people. I became their go-to guy,” Ramzy adds.

The chef considers cooking as more of a hobby than a job. “It’s something I love and I’m getting paid for it, which is perfect.” From the young age of nine, he found solace in the kitchen, cooking meals for his family. “I’ve always had a passion for cooking. When I used to come back from school, I went straight to the kitchen to check what’s available. If I didn’t like the food, I would just make something myself.” Drawing on his early experiences, the chef adds how he’d always sit with his grandmother in the kitchen while she was cooking. “She’d explain how she prepared the dishes and ingredients. I just fell in love with the whole process,” recounts Ramzy.

So, how did he foray into being a private chef? By accident. “When the Covid-19 outbreak happened, I remember I was on my way to work one morning and they called me up, saying I didn’t have to come in. The restaurant shut down overnight and went into liquidation. That was it. I had lost my job,” shares Ramzy. In March 2020, the chef witnessed the hospitality industry in London collapse, as restaurants shut shop overnight, leaving several people unemployed. “It wasn’t just the restaurant where I worked, all the other restaurants got closed as well. And since I didn’t have a job, I couldn’t cover the rent. So, I had to take the emergency flight back to Lebanon as the airports were getting shut as well,” he says.

After finding himself unemployed and relocated all of a sudden, Ramzy dabbled with a few side hustles before becoming a full-time private chef. “I really missed cooking so I wanted to get back to it by any means. I started calling friends and family over. They would bring some guests,” he adds. Soon, by word of mouth, the chef started getting clients who’d ask him to come and cook dinner at their home for certain occasions. After spending some time in Africa as a live-in private chef, Ramzy finally landed in Dubai in April 2021. The chef has since been cooking fine-dining meals at people’s homes, including specially-curated iftar meals for the holy month of Ramadan.

Being a private chef has been a fairly new avenue to explore for Ramzy but running his own kitchen had always been a dream. “Depending on what the menu includes, how much the ingredients cost, how long it would take to prepare, I come up with a price per person. Let’s say some people want to have dinner at 9pm, I’ll be there at 10am to start preparing if it’s a six-course meal for around 10 people.” Contrary to restaurant kitchens, the meals in Ramzy’s kitchen are prepared by the chef alone. The idea of ​​managing the work of four to five people all alone may seem daunting but to the chef, it’s rather therapeutic. “I just make a list of what I need to get done first and work accordingly. I always have music in the background. Once I get in the flow, there’s nothing in my mind anymore besides cooking,” adds Ramzy.

While it was a complete change of plan from what he originally set out to do, Ramzy admits he has been enjoying the benefits that come with being part of the gig economy. Even more so in the post-pandemic world, where poor employee mental health has been amongst the primary factors triggering the great resignation. While many staffers were let off due to the onset of the pandemic, the ongoing economic trend suggests people have voluntarily been quitting their jobs across the globe, signaling a need to be their own boss. For Ramzy, being a private chef has allowed greater flexibility and better pay. “It’s a lot more relaxed. There are no limits to what I can do. There’s no set menu so I can be as creative as I want, without any repetition.”

While there are many advantages to the entrepreneurial spirit, there are also certain challenges one needs to keep in mind. “Being a private chef doesn’t always guarantee a stable source of income. Some months will be better than others. In slow periods, I host dinners at home, inviting my friends over and they bring guests along, to keep the momentum going.” For young chefs looking to go down this route, Ramzy recommends it’s imperative to get some work experience first.

“If you just start off as a private chef, you won’t know what the job demands. It’s important to work in restaurants first,” says Ramzy, adding that he wouldn’t mind going back to working in a restaurant to gain experience as head chef. “My goal, hopefully, in the next five years, is to open my own restaurant and see how that works,” mentions the chef, who’ll soon be running the kitchen for a new pop-up concept for Pinch Gourmet, Dubai, have a supper club.

With Eid Al Fitr right around the corner, we ask him what his ideal festive meal would look like. “It should definitely involve the family coming together as that’s the true essence of Eid. So, I’d cook something that brings everyone together, something like whole fish or maybe a lamb leg, with little starters on the side. For example, I’d make traditional Kafta balls but with an Italian twist, adding marinara sauce. And for a vegetarian option, I’d prepare skewers of mozzarella and tomato with pesto. Or tofu, if you’re vegan,” Chef Ramzy signs off.