“Missions and tasks are distributed among canines based on their specialties. German and Dutch Shepherds and Malinois dogs handle guarding duties, lead tracking and detection of all kinds as they are known for being more resilient. On the other hand, English Springer, Labrador Retriever , and Cocker Spaniel specializes in recovering hidden narcotics and explosives, uncovering dead bodies, searching for missing persons, and tracking possessions and flaming materials,” Maj Al Mazrouei added.

“A specialized committee has been formed to run tests to handle canine recruitments based on their instincts capabilities to undertake policing missions and handle the workload. Canines join the Dubai Police team at ten months or a year and half of age and continue to serve the Force for seven more years,” Maj Al Mazrouei continued.

“During their years of service, K9s undergo medical checkups and performance tests to determine their capabilities to carry out police work. Suppose Dubai Police veterinarians or canines’ trainers give reasons for necessary retirement. In that case, dogs are placed for adoption under certain conditions , and we get many applications from dog lovers among the public,” he elaborated. 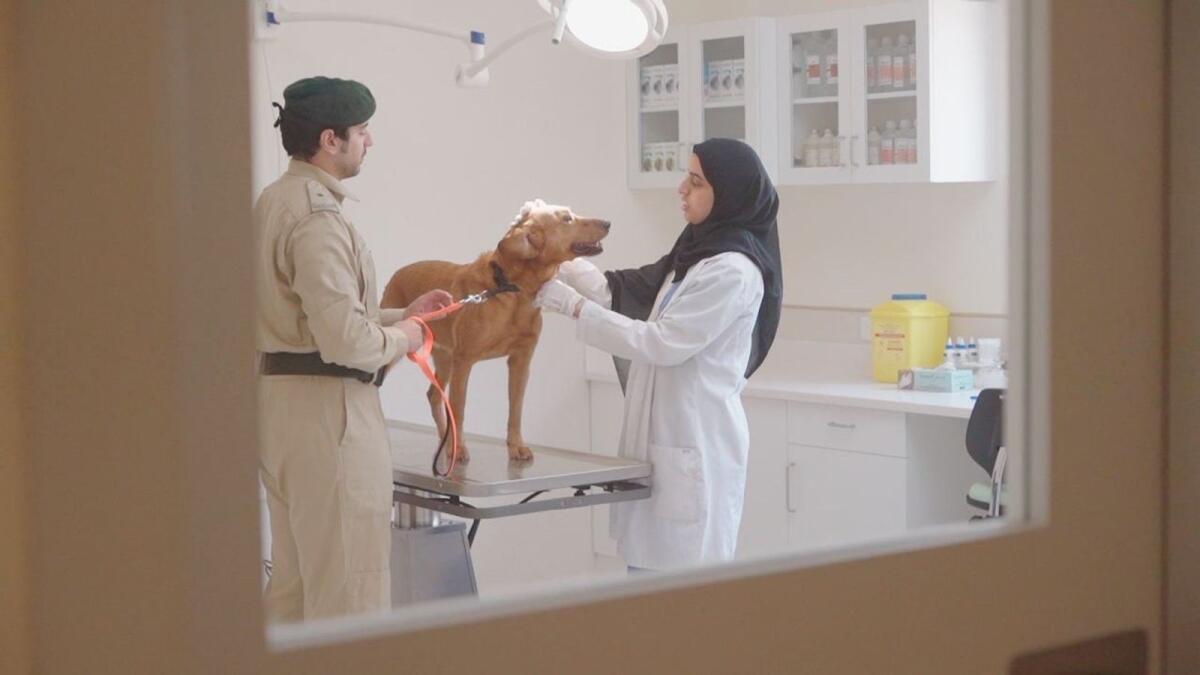 Captain Khalifa Al Suwaidi, Head of Security Missions Section, said that K9s are a vital aspect of policing operations, including search and rescue missions, lead tracking, and guarding, to name a few.

“Each canine has his/her specialty based on its breed. There are ones that excel in tracking leads, others in searching for missing persons by their scent, others in uncovering dead bodies and body parts despite the time of death or the depth of their burial,” Cap. Al Suwaidi explained.

“Some canines are assigned for anti-narcotics missions to detect narcotics, psychotropic substances such as weeds, opium, marijuana, hallucinations drugs, amphetamine, heroin, and cocaine…etc. During the mission, K9s sniff out hidden drugs even if buried., ” he continued.

“We dispatched canines to determine if a fire breakout is to be considered an arson case by sniffing out gasoline, diesel, kerosene, …etc.,” the Head of Security Missions Section added.

“K9 sniffer dogs have been stationed at airports across the country to help detect traces of the coronavirus from passenger sweat samples with 92 per cent accuracy,” Maj Al Mazrouei added

“We have trained 38 canines, including German Shepherds, Labradors, Cocker Spaniels and Border Collies, to recognize the scent of Covid-19 using samples of sweat from people with confirmed infections, collected by holding a swab in an armpit for a few minutes. He explained that there is no direct contact between the canines and the passengers,” he explained.

Captain Saud Sultan Al Suwaidi, Head of Technical Affairs and Training Department, attributed the success of the K9 Unit to lengthy training sessions that accumulated to 7923 hours for both canines and their trainers over the last year, 2021.