The veteran ghazal and playback singer will perform on May 6

If you are familiar with the Urdu and Hindi dialect, there is no doubt that you may have come across, or hummed (not knowing the singer), songs like Chitthi Aayi Hai. For the universal, Padma Shri (fourth-highest civilian award of India) Pankaj Udhas is the man behind that song, and many other ghazals and soulful songs that you have come across.

As a regular performer in the UAE, Udhas will once again serenade the audiences in Dubai as part of Eid celebrations on May 6 at Dubai World Trade Centre. The veteran singer will treat fans to a rendition of ghazals spanning the past 40 years in his new timeless symphony concert.

“I am doing a beautiful fusion of my music with a bit of an orchestra,” Udhas tells City Times. “All the visitors to the concert will experience a different aspect of Pankaj Udhas without losing the basic essence of his type of music and compromising with the emotions. It will be a really different experience,” he promises.

Udhas first performed in Dubai in the 1980s. And while he finds a lot of young people among the audience today, it was also the case back then. When the veteran is not performing, he loves to go around with his small group of friends on a yacht or around Dubai Creek.

We caught up with the singer over Zoom and discussed his take on music trends today and what keeps him going, even at the age of 70.

You have been a regular performer in Dubai. What are your thoughts on the city?

I have some wonderful memories of Dubai. And as you rightly said, I’ve been coming to Dubai for a very long time, I could say four decades. And Dubai has, obviously, changed a lot since I first performed in the city, somewhere in 1982 or 1983. Since then, Dubai has changed a lot, obviously, because I’ve been coming year after year. But the only thing which hasn’t changed is people’s interest in my music. I consider myself wounded and very fortunate that the interest in my music and the following of music lovers and fans, has not decreased even 1 per cent.

Yes, Dubai has grown really very big. It is one of the most amazing and modern cities in the world. I always look forward to coming to Dubai because, over a period of time, I have made many friends there. Now, I lag behind because there are so many places that I would like to visit. Every trip to Dubai, there is another great attraction to visit.

What attracts the younger generation to your music?

Well, that’s a good question. It’s a planned strategy in the sense that I have thought about it, and I’ve worked accordingly. And fortunately, for me, it has worked. As far as my music, sound, and poetry is concerned, I moved on with the time. I kept on making necessary changes to keep in touch with the younger and next generation.

Even today, 16 and 18-year-olds are humming one of my tracks, Aur Aahista Kijiye Baatein. It is still making rounds on all social media platforms. And the reason is that my sound, poetry, and approach to music has kept pace with time.

To what do you attribute the evergreen appeal of ghazal music…

There are two major elements. The reason why ghazals have survived for 400 years is mainly because of the content, the poetry. Poetry is so powerful, appealing, and beautiful. It transcends from generation to generation and every generation just loves the words; how you put those words to music, how you sing them, a combination of melody and poetry. You can’t go wrong, because even today, you remember all the old Bollywood songs. Why? Mainly because of the melody, the lyrics, and the poetry.

What are your thoughts on the current music trends in the world?

Music worldwide has gone through major changes. It has adopted a particular style which caters more towards club and dance music.

I am a huge fan of the Beatles and I feel that in music, there is always some kind of a balance, which comes in with the right kind of emotional and lyrical songs with brilliant singing. On the other hand, you have some fast tempo and some very peppy songs that make you groove. 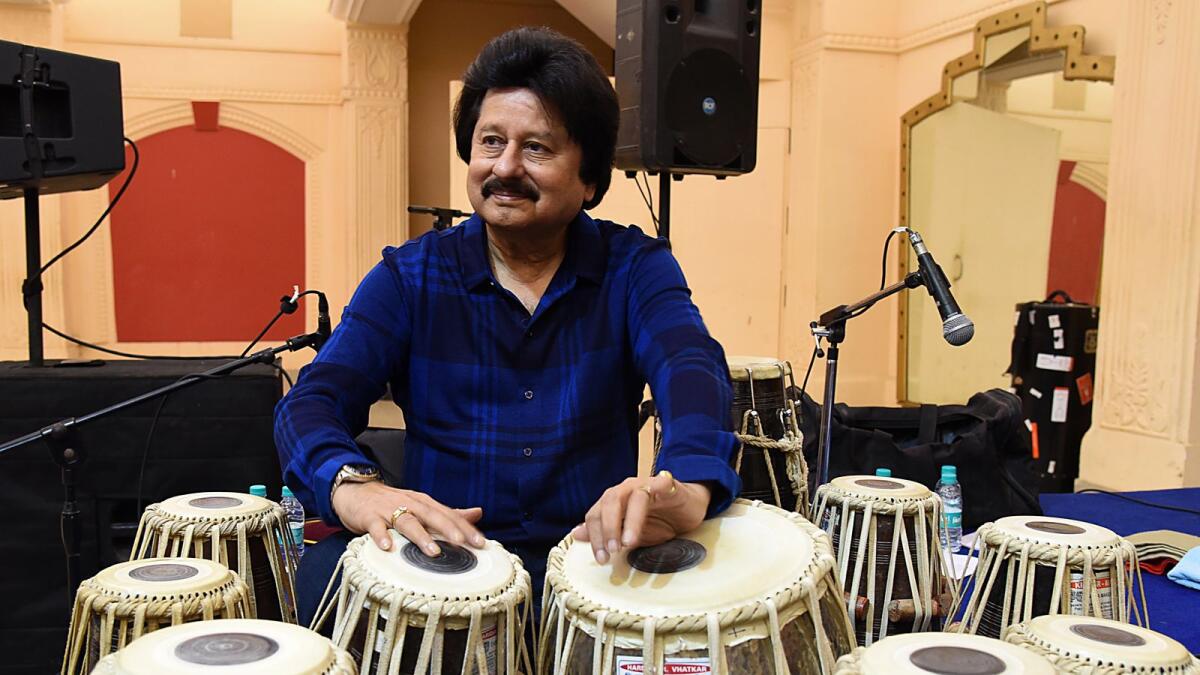 But these days, I feel that there is a lack of that balance. These days, what you hear is more of club and less of lyrical songs. So I feel that the balance has to come back. Because it’s very important for music to have the right kind of balance.

So would you be open to remakes or remixes of your old hits?

Well, I have no issues. In fact, I was considering it at one point. It almost worked out, but unfortunately, because of some glitches here and there, we could not do it. But I was very keen to collaborate with a singer from Lebanon. I was really looking to collaborate with an Arabic singer because I love Arabic music. I think that in Arabic and my kind of music, there’s a lot of synergy and we can come together to make a very nice album. So I am certainly open to collaborating with the right kind of group or a singer. And I’m sure we can do very well.

What keeps you going? The mantra before your concerts…

I am very passionate about the kind of music I do. If you look at Pankaj Udhas, he is a big example of someone who has followed and pursued his passion. So I think it’s the passion which keeps me going even after 40 years of performing on stage. I still feel that there is so much more than I can do. And it’s mainly because of the passion.

What are your thoughts on getting into the music industry in the 80s versus now?

Getting into music is much easier than before. When I started there were no tapes. What we had were vinyl records. Cutting an album and putting it on vinyl was considered the ultimate thing for any singer. Today, when a singer, or when someone wants to do something, it’s very simple; go to the studio, record, and put it on YouTube. And if your work is good, it will get noticed, it will get millions of views and as for the rest, people will do the job. So, it is certainly easier than what it was in the old days.

What is your message to aspiring singers out there?

I would like to tell them that, while there is nothing wrong with putting your music on social media, don’t think short term. I know many singers in India who put one video on YouTube, the video becomes viral, everybody knows that person, but six months down the line, nobody knows who that artist was. That should not happen. Every aspiring artist should think that if they are doing something, it should stay for a long time. And that cannot happen without dedication and passion. So if you seriously want to pursue music, dedicate yourself completely to this and you will achieve something by which, even 10 years down the line, people would know who you are.

Tell us about your new and upcoming projects.

As I said earlier, we are now in a different zone altogether as far as music is concerned. So I am relaunching my own YouTube channel on a much bigger scale. The channel would cater to my kind of music, it will be a one-stop YouTube channel for all the ghazal lovers.

I am also working on a new album, which I will launch during my concert at Sydney Opera House on September 4.

Pankaj Udhas will perform on May 6 from 7pm at Dubai World Trade Centre.