Popularly known as BeerBiceps on social media, the YouTuber who gave up his engineering career to become a full-time content creator talks about the art of asking tough questions with ease and why Dubai makes for a very content-friendly city

Becoming the first Indian content creator to crack a Spotify deal for his podcasts, Ranveer Allahbadia has amassed a total of 7.16 million subscribers on his YouTube channels over the last six years. Creating multiple pieces of content weekly, including longform podcasts, vlogs and reels, Ranveer, 28, known famously as BeerBiceps on social media, has organically cultivated a solid community comprising the Indian youth that follows him on a journey of self-discovery.

Having studied engineering, Ranveer never anticipated a career on YouTube but took the leap of faith, eventually finding a strong footing as a podcaster in India at a time when the medium was still in its nascent stages. Having had several global personalities on his podcast, The Ranveer Show, and co-founding three businesses on the side, the podcaster-entrepreneur believes he’s just getting started.

We catch up with the multi-hyphenate on his Dubai visit, where he opens up about his incidental career path, his mental health journey and coming face to face with fame, while still maintaining a higher purpose in life — beyond money and material goods. 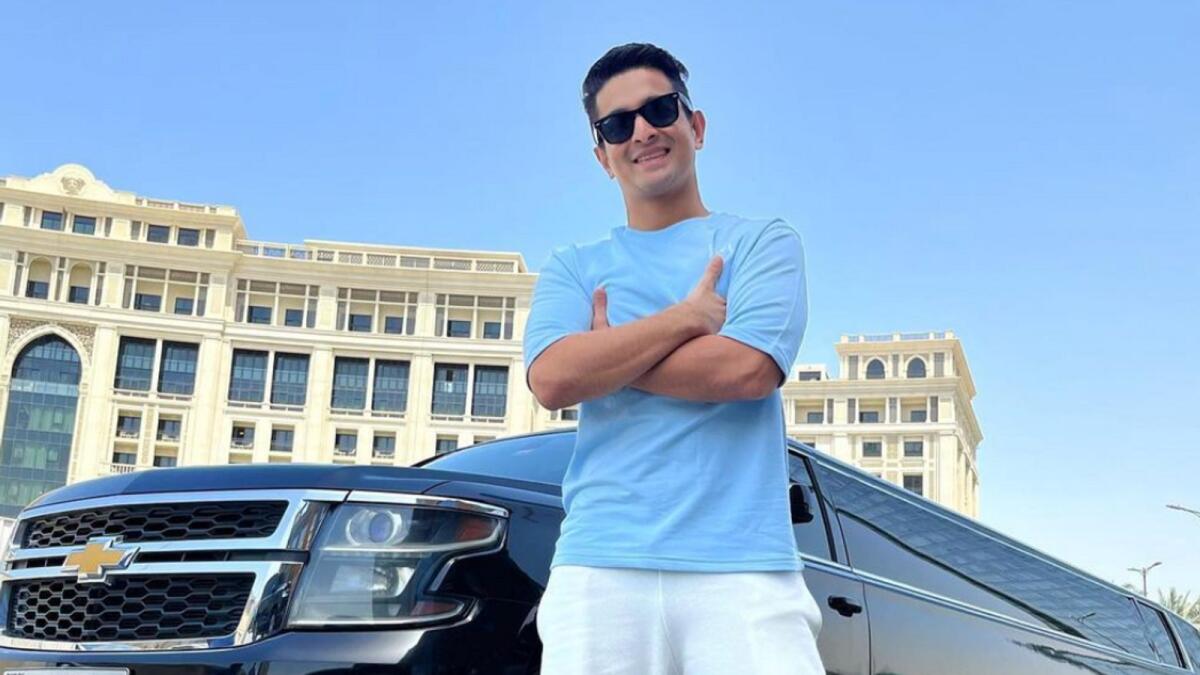 How has your Dubai experience been so far?

It’s been fantastic. I’m actually here on a shoot, creating vlogs and meeting other content creators. What I love about this place is the cosmopolitan culture. It’s a very content-friendly city and there are lots of things to show around that are perfect for a content creator. I’d love to do podcasts in Dubai. There are some Pakistani artists and sports people who are on top of my list and Dubai is a great melting pot of Indian and Pakistani cultures. There are a lot of interesting podcasts and content waiting to be created here.

You’re known to be very candid in the questions you ask people on your podcast. Does that come from a place of not being fearful?

When you write a lot, you become good with your words. I know that some of the questions I ask are really upfront and rude. Sometimes I ask people about their own death. But if you sugarcoat it a little bit before asking the question, people allow you to ask almost anything. Everyone wants to have a deep conversation. Everyone wants to think really deeply about themselves. It’s the heavy rude questions that force you into that zone. If you ask your own heart’s questions, that’s all people want. For example, especially Bollywood celebrities or cricketers are so used to being asked the standard questions that when someone asks them about their own insecurities or vulnerabilities, they actually feel nice. The thing with famous people is they don’t like being treated like they’re famous. So, as long as you have a real human conversation, you can bring out really good content.

Let’s ask you a tough question. Do you consider yourself to be an old soul?

I don’t know, honestly. It’s not for me to decide.

You often have deep conversations on your podcast. Where does the wisdom come from?

I’ve just put the right people in life. I had an Ayahuasca experience when I was 22, which is a ceremony done by the shamanic tribe in South America. They make you have a type of tea, which pushes you into a sort of self-realisation zone. It’s not recreational. The science of it is that there’s a molecule in your brain called DMT, which is released when you’re dying or dreaming. This is a way to stimulate your brain to release DMT when you’re not dying and not dreaming. What it does is it breaks old neural patterns and forms new ones. And that was a life-changing experience. When I first met my shaman, I had a very deep conversation with him, which I really enjoyed. And a conversation is basically you bouncing off someone else’s energy. So, as long as your energy is deep, the conversation will become deep.

Where do you get this curiosity streak in you?

When I was a kid, I used to ask a lot of questions about why the moon is round, or why the sun is so bright. I was always shut up as a kid. So, I promised myself that when I grow up, I’m going to be the person who asks a lot of questions, I just think I’m fueling that. Moreover, it’s just about having good conversations. I think that really is my high in life.

You talk about your childhood. Was it the same curiosity streak that made you want to become an engineer initially?

Have you seen this cartoon called Dexter’s Laboratory? I was very fascinated by robots when I was a kid. I assumed that engineering college would be like that. And it’s not exactly like that, especially in the subcontinent. But I’m glad I went through it anyway.

How did you switch to podcasts?

The thing with the subcontinent is that world culture takes five years to reach there but it reaches the urban parts of the subcontinent much earlier. In college, I used to listen to a lot of podcasts and always wondered why anyone wasn’t doing it in India. I was already making YouTube videos at this point. So, once content creation started becoming stagnating for me, I thought the easiest way, instead of shutting down my channel, was to actually record the process of learning through conversations. That’s how the podcast started. I didn’t anticipate that it would shape up like this. 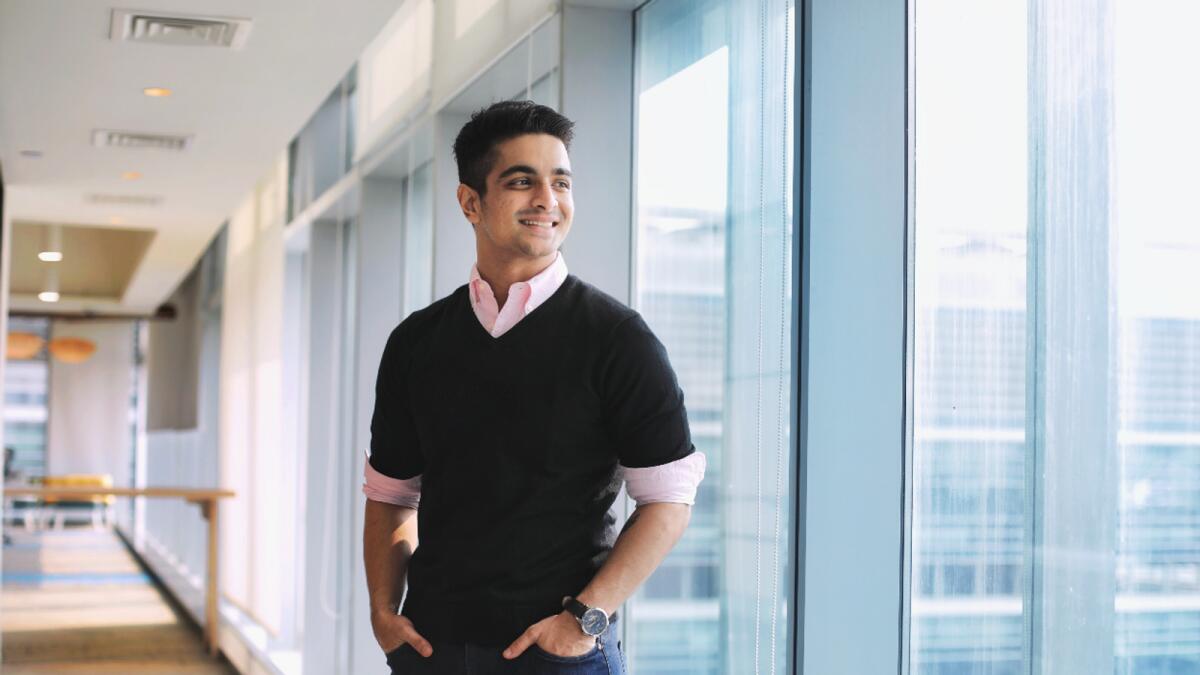 Coming from a South Asian family, did you find it challenging to convince your parents to make the move from engineering to being a YouTuber?

It was difficult but here’s a hack for brown families — if you show them the money, they’ll be on board. You just have to show them that you’re capable of earning good money. Right after engineering college, I started coaching people with their fitness training and surprisingly it paid me better than an engineering job at the time. I used the money to fuel my YouTube career.

You often speak about going through depression. How has that shaped you?

I didn’t have clinical depression, as I wasn’t diagnosed with it. But I had a phase of very low mental health, where I even thought of suicide and extreme situations. It was just after college. I have a mentor, Luke Coutinho, who told me about this concept. I think it’s from the Bible, if I’m not mistaken, it’s called the Dark Night of the Soul. It suggests that before the best phase of your life, you will have a long phase of darkness to mold you into what is required for your mind to handle the best phase of your life. 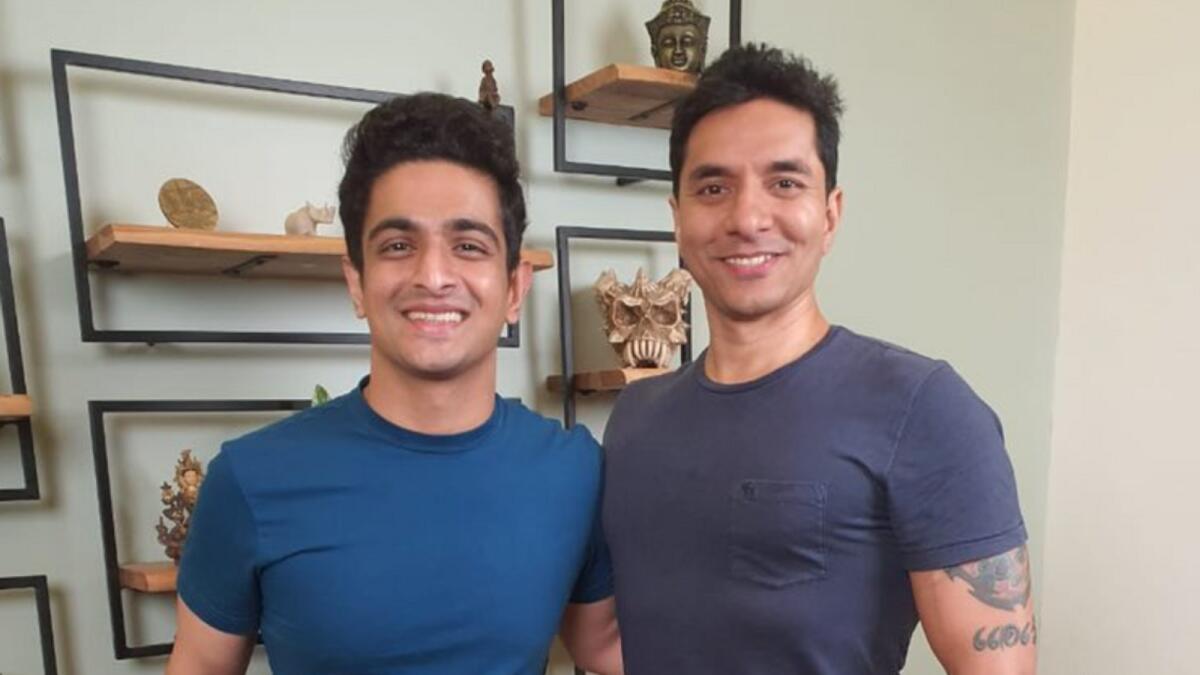 It might be a fictional concept. But this is a pattern I’ve seen, not just with myself or my mentors, but with everyone I’ve had on the show. Technically, they are all what the world would call ‘successful’. Yet, they’ve all gone through a bad phase before they tasted success, whatever their definition of success might be, which for me right now, is family life. It’s not about the money. I’ve spoken about this on my vlogs as well. I feel very lonely and isolated. But it’s fine because hopefully, it’s a pre phase for the good phase that’s coming.

Is that what keeps you afloat through the dark phase?

I think a sense of purpose keeps you afloat, when you have something going for you. That could be a career or anything else you’re trying to do in the world. We just launched our first NGO-led school, which supports underprivileged kids. It has been a project I’ve wanted to implement for a couple of years but it only came into fruition recently. Just the process of seeing kids sitting in that school has given me a whole new sense of perspective.

You create long form content at a time when 15-second reels are all the rage. Do you think the audience’s attention spans are shortening?

This is an actual problem. We’ve seen it with our own content, where, to some degree, the joy of creating slow content has gone away and I don’t think podcasts are slow. Slow content would be slow movies. People don’t watch that type of content anymore. People listen to podcasts when they need help in life, when they realize they need to learn more about something. They listen to podcasts with intention. But the content you listen to or watch without any intention, it has all become short, to the degree where now, when we’re doing vlogs, we can’t plan frames that are longer than five seconds. We have to keep switching frames just to keep people’s attention. So, you don’t get to express yourself entirely as a content creator. I do think that this is having a negative effect on people’s minds. But I also think that people are going to get over it in three to four years. 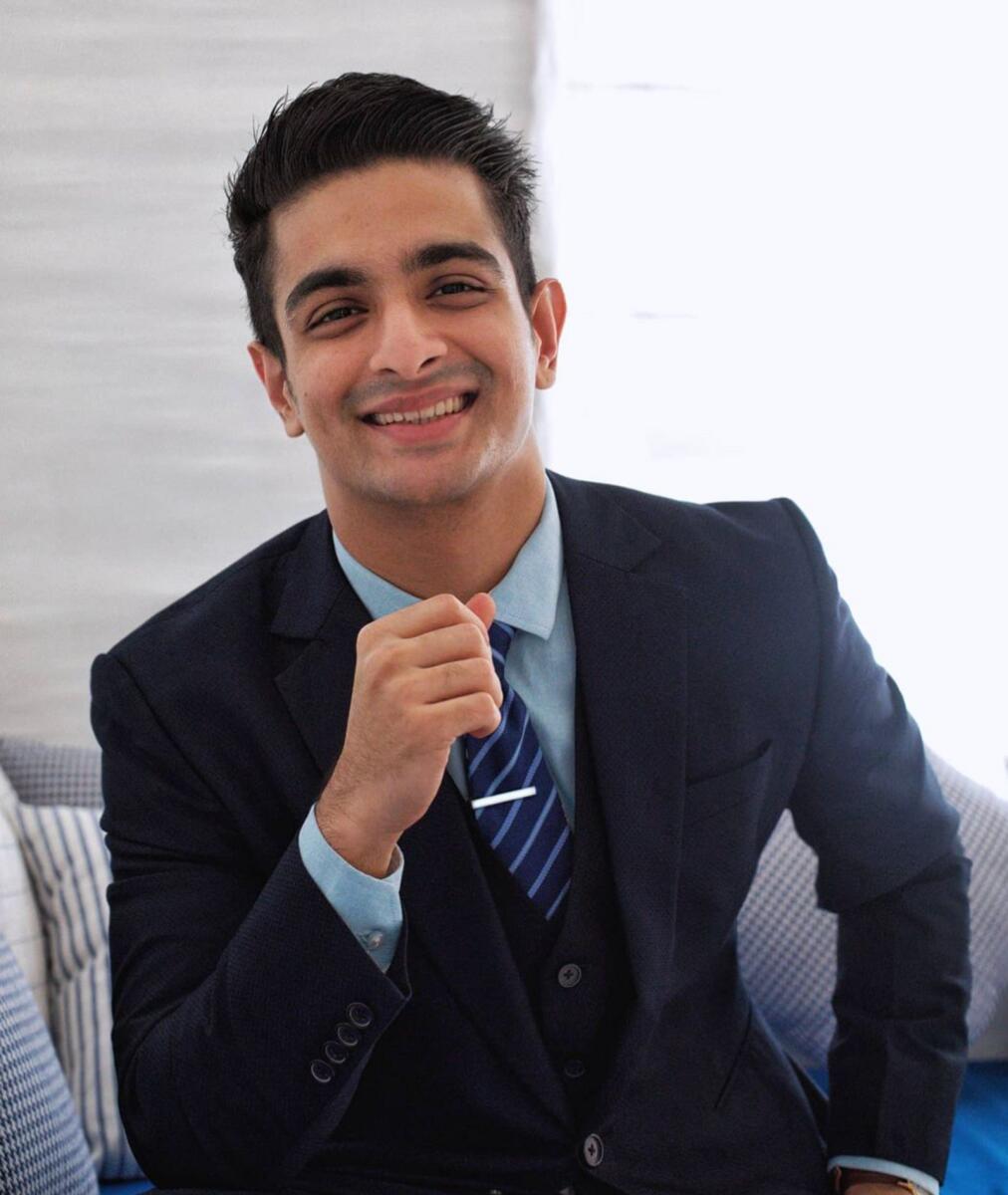 You’re also coming up with a book.

It’s the book I’ve written nine times. Each time I read it, I’m not happy with it. That’s my ADHD playing up. Every time I read it, I feel like I’ve grown so much in the past year, it shouldn’t really end there. And then I rewrite the entire thing. So, I’ve actually taken a break from it. I’m not going to release it till I’m 32 or 33. The book is a health autobiography. I had a lot of health problems growing up and then got into fitness. I wrote the book when I was 23. I was very aggressive at that point. So, there was a lot of aggression in the book. And every year after that, the aggression got toned down. Even now, I might think I’ve reached the pinnacle of being peaceful but it’s never the case. I’m also involved in a lot of entrepreneurial ventures right now, which require you to be inherently aggressive. And that aggression finds its way into your creativity as well. So, I’m waiting to reach a point in my life where I don’t think about business as heavily. Then I can give that book pure creativity. 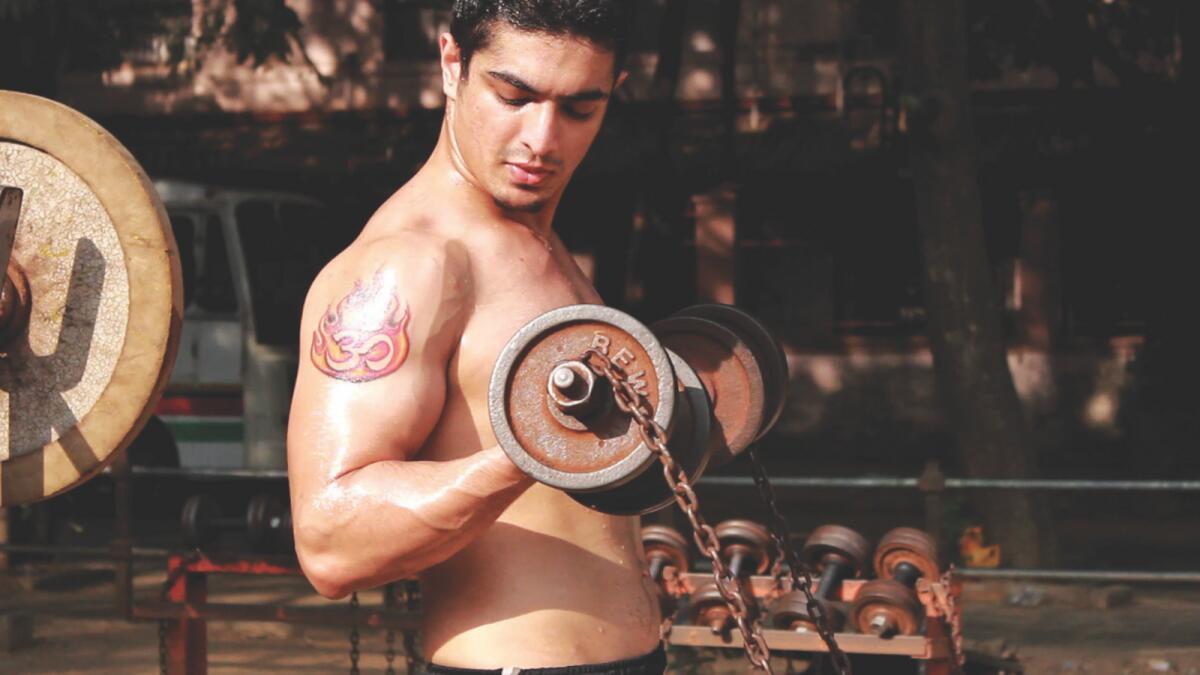 Lastly, in this phase of your life, what are you chasing?

I’m chasing marriage (laughs). This life is really crazy, there’s too much to do. And there is a lack of stability in my head right now. I’ve lived on this planet for 28, almost 29, years now. So, you learn certain things about yourself and I’m very happy to get married soon. But I’m not chasing it actively. I think there’s a right time for everything. If you scan all the best people in your life, you’ve never gone out chasing them. They’ve always come, at least in my case.