What do you get when you put three air hostesses, one international casanova, his trusted sidekick, and one housekeeper into a single apartment – total chaos! H72 productions brings to you the classic ‘Boeing Boeing’ which will be directed by Dee Gee. This theatrical production promises to be a super-sonic comedy with a lot of confusion, confessions, chaos, and near escapes! The show is playing at the Junction Theater at AlSerkal Avenue from July 1-3 with shows starting at 7:30 pm every day and a matinee at 2:30 pm on July 3 as well. 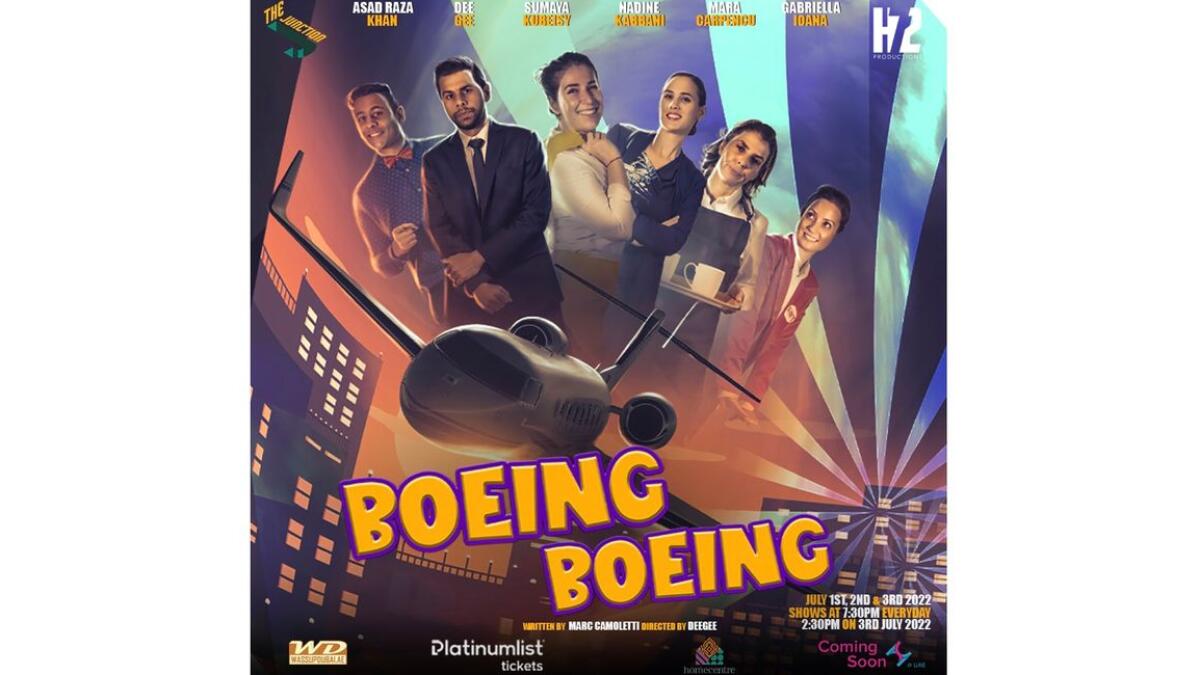 Written by French playwright Marc Camoletti and translated to English by Beverly Cross and Francis Evans, the show follows swinging bachelor Bernard in his flat in 1960s Paris. Bernard is simultaneously engaged to three gorgeous women – Gloria, Gabriella, and Gretchen – who are all flight attendants and don’t know about the existence of each other. Bernard’s life begins to fall apart when his friend Robert visits and a new, speedier Boeing jet completely messes up his planning. To top things off, the three women arrive in Paris simultaneously.

Dee Gee, playing the role of Robert, and director of the show, says this project has been in the works since 2017: “I am excited and nervous! I have been blessed with a fantastic cast who have accepted my vision well for which I am grateful. I would like to thank H72 Productions and The Junction for their continued support through the years into making me the artist I am today. Boeing Boeing is an epic farcical comedy which will absurdly keep you on your toes throughout the performance. As they say, you can plan and plan and plan, but, in the end, whatever is meant to happen, shall happen.”

Asad Raza Khan, playing the role of Bernard, is excited to be part of such a multi-cultural cast: “We have so many nationalities in the play, a true depiction of how the UAE is. This play has been on our radar for some time now. It is a wonderful story which has been not only performed on Broadway, but also adapted into Hollywood and Bollywood movies. Get set – it’s going to be one bumpy ride! With the world looking forward to traveling in the first normal summer in a long time, we thought it would be best to bring this time up with a play about – well airlines and airhostesses.”

Nadine Kabbani, who is playing the ever so vibrant American Gloria Hawkins says: “Gloria’s character is so much fun to play…she’s a contrarian who is entitled and manipulative, yet charming, intelligent, and irresistible. What drew me in are the beliefs we have in common but what I’m enjoying most is playing the dissimilarities that don’t come so naturally to me. She reminds me how wonderful it is to be a woman in an unequal world.”

Mara Carpencu, playing the Italian Airhostess Gabriella, says: “I am delighted to have the opportunity to share the stage which such a talented cast, it’s been a wonderful experience preparing for this fun and fast-paced performance, where timing is key and nothing seems to go as planned. I hope the audience will enjoy the play as much as we have enjoyed putting it together.”

Gabriela Ioana, playing the role of Gretchen is enjoying the process: “What a cast and what a crew! I have been part of many productions in Dubai but honestly this has been the most fun I have had in the rehearsals. The energy is infectious! Everyone is just so funny.”

Sumaya Kubeisy who plays Bertha, says: “It’s been great fun re-creating this classic comedy and meeting a fantastic bunch of actors. We all truly look forward to rehearsals.”

H72 Productions have been an integral part of community theater in the UAE for over 12 years. They have consistently churned out multiple productions every year across a variety of different genres. However, none of this would have been possible without the ever-vibrant community and their continued support.

Tickets are available online at Platinumlist.net and start at Dh80.